Skip to content
January 1, 2012November 11, 2014 ~ RSVP to me ~ Leave a comment
Ok, so it’s been a LONG time since our last post…we’ve certainly been busy – between new client orders, showcases, photo shoots for magazine articles, two more ‘My Fair Wedding’ episodes…. you name it, we’re doing it!

But THIS particular blog post is LONG overdue! If you follow us on Facebook, you probably already know that we had the distinct honor of being invited to the ‘My Fair Wedding’ Season Premier Party with David Tutera back in October of 2011. ‘RSVP to me’ provided the wedding day stationery/printed materials for three episodes of WEtv’s MFW so far, and we were extremely excited to be invited as VIP guests to this fabulous bash! My husband and I managed to squeeze two days out of our very full schedules to take advantage of this amazing opportunity.

We flew out to Los Angeles and checked in at the gorgeous Millenium Biltmore Hotel – a TRUE old-style Hollywood hotel! Glamour, grandeur, and old-world architecture are just SOME of the ways to describe this amazing hotel. Take a look for yourself (photos courtesy of ‘Travels with Two’ blog).

The afternoon of the Premier Party, my husband and I decided to pamper ourselves a bit at the Neihule Salon. While he relaxed at the Spa Bar with some refreshments and iPad service, I was pampered by the amazing staff at Neihule getting my hair and make-up done for our big night out!

Then it was time for the party….held at the beautiful Park Plaza Hotel in downtown Los Angeles – a historical landmark, and the site for many movies, commercials and TV sets. As we entered the foyer via the “vendor/VIP” line, we were greeted by two human red carpets – yes, HUMAN – draping down from atop a beautiful, wide stair case. 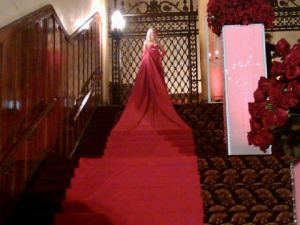 When we reached the top of the staircase, we were greeted by “brides” wearing the latest fashions from David’s new wedding gown collection, Mon Cheri Bridals. We even got the photo-op in!

We then entered and were seated in a huge ballroom, with all the guests & vendors anxiously awaiting David’s arrival, as well as the Premier Screening of the first episode of MFW’s Season 5.

We were even treated to the amazing vocals of Frenchie Davis, the former American Idol contestant and Broadway Star. 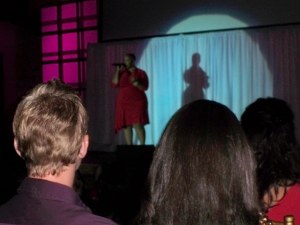 As David entered, he was greeted with huge cheers. And as he spoke to the crowd, I was reminded of his sheer genuineness – a quality that stood out to me when I first met David, back in New Jersey. His love for his work & his family were also obvious, as he warmly spoke of his brides from Season 5, and then introduced his parents and his partner seated in the audience.

After we watched the screening of the “Make-a-Wish” Bride episode…(did you SEE that one?!! what a tearjerker!!), we were ushered into a ballroom, where we were greeted with delicious hors d’ouvres, fabulous music, and contagious dancing! When David made his way into the room, I was able to catch his ear for a few seconds before he was whisked away by his busy staff members – but not before he hugged me and thanked me for flying out all that way, and for my “amazing work”!! Silly me…I had the camera in my hands the whole time, and forgot to give it to my husband! So, no pics of the “encounter”! In any case, my husband and I enjoyed our time at the party; met some great new people; and got to chat with the girls from David’s staff that I deal with when I am doing the episodes. Surely, an experience I will not forget.

For an “inside” look at the Premiere Party, check out this video from ‘Atta Girl’ posted on You Tube: http://www.youtube.com/watch?v=qrBCOBx_jP4
DON’T FORGET…..the next episode in which ‘RSVP to me’s printed materials will appear airs on January 22, 2012!! Tune in to WEtv, at 9pm ET!!